Questions of the History of Fortification. Issue 8. 2021 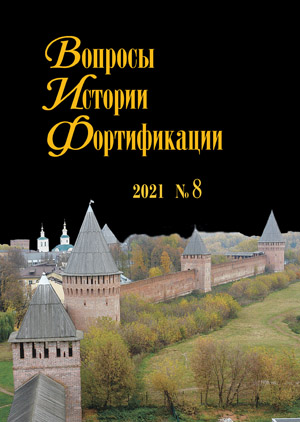 Programme of the International academic conference on the history of fortification dedicated to the 425th anniversary of the beginning of the construction of the Smolensk fortress wall and the Year of Science and Technology in Russia (Smolensk, October 15–17, 2021) (bilingual)

Kalinin V.I., Orlov V.A. Kowno Fortress and an assessment of its defense in 1915 by military engineer Lieutenant General A.V. von Schwartz (in Russian)

A.V. von-Schwartz. How the fortress of Kowno was attacked and taken (in Russian)

Perbellini G. The Fortresses in the Lagoon and the Venetian gates in the Mediterranean Sea from 14th to 18th century (in English)

Shevchenko E.A. Creation of defensive lines on the border of the state and urban planning as a purposeful process of formation of the system of settlement of the state at the end of 15th–17th centuries (in Russian)

Podluzniy D.A. Positioning of fortifications at Verhniy castle in Polotsk in the mid-16th century (in Russian)

Milchik M.I. Who and when rebuilt the fortress of Koporye in the 16th century? (in Russian)

Nossov K.S. Smolensk fortress wall of the turn of the 16th–17th centuries among Russian fortresses in the “Italian style” of the late 15th – early 18th centuries. Part 1 (in Russian)

Davydov I. The entrenchments of the Russian army from the year 1700 in Narva (Estonia). Some preliminary results of studying of the fortification monument (in Russian)

Belik Yu.L. Some fortification features of the Kerch Fortress (in Russian)

Avilov R.S. The projects of the Peter the Great Gulf coast defense for confront marine landing of Japanese troops on the distant approaches of Vladivostok Fortress (1910) (in Russian)