Questions of the History of Fortification. Issue 6. 2017 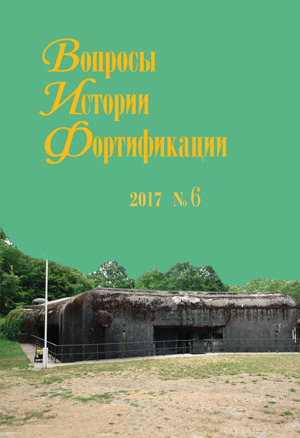 Jastrzebski J. Defence of Modlin in 1915. The report lectured on organization meeting of the Fortification Section of the Society of Military Knowledge. March 25, 1926. Part 1

Lestev A.E. Fortifications used by the knights of the Order of Saint John in Malta

Nikiforov D.N. Field defensive line in the zone of responsibility of the 25-th Army constructed during the Great Patriotic War in the direction to the City of Voroshylov-Ussurijsky (Ussurijsk). Along with materials of field investigations. Part 1

Mordovin-Zalesskiy A.K., Nossov K.S. Kiev fortifications after the “Building book of the year 1679”

Bukanova R.G. Fortress Ufa in the 16th–17th centuries and the question of its modernization in the 18th century

Muratova S.R. The impact of the frontier on the character of the formation of boundary lines in the Urals and Western Siberia in the 18th century

Shemelina D.S. German engineer G. Rimpler’s ideal city-fortress: from the treatise to the realization in the Siberian Gor’kaya line fortresses (according to the 1765 redevelopment projects)

Avilov R.S. Vladivostok Fortress in the creation and development of the defense conception of the Russian Far East in 1860–1914: the actual situation of the issue

Kasyanov N.V. On the modern technologies in the study and preservation of monuments of the military defensive architecture

HFSC COMPETITION for the Best Work on the History of Fortification