Questions of the History of Fortification. Issue 3. 2012 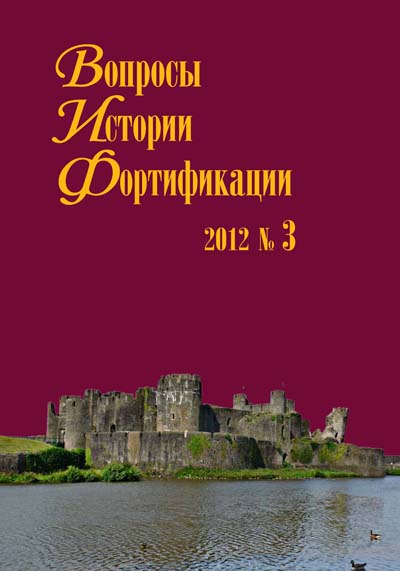 CONTENTS
PRIMARY SOURCES
Nossov K.S., book on the fortifications of , 1679.
Korshunov E.L. German defensive positions at Sinyavinskie heights in 1943.
ARTICLES
Denisov S.A. Macedonian Fortress Prosek according to Byzantine sources of the first half of the 13th century.
Stepko L.A. Sudzhuk-Kale: an unknown about the known.
Panasenko А.Е., Ivanov Yu.V. Artillery Caponier No. 1 of the Grodekovsky Fortified Region of the Special Red Banner Far Eastern Army. A unique example of the transformation of an artillery caponier into artillery semi-caponier.
Zakharov D.A. The history of the construction of Sursky and Kazansky defensive lines on the territory of in 1941–1942.
ABSTRACTS
from 4th conference of the HFSC (18–19 November, 2011, )
Karelin D.A. Late-Roman fortresses in the Kharga Oasis (): architectural features and the principles of location.
Gubaidullin A.M. On the fortification of Volga at the time of the Golden Horde.
Kurmanovski V.S. Camp defences of Vladislav IV’s army in Glushitsa.
Nossov K.S. The distribution of people and guns on the walls and towers of Smolensk Fortress in 1609.
Leont’ev A.E., Pechkina L.V. Rostov Fortress in 1632. From the time of building to our days.
Mikhailov A.A. The artillery of Opochka Fortress in the 17th century.
Garanichev V.V., Kurmanovski V.S. Earth fortifications of the beginning of 18th century on the territory of the Smolenskaya oblast’ (short review).
BOOK REVIEWS
HFSC COMPETITION for the Best Work on the History of Fortification in 2011
ABOUT THE JOURNAL
CONTENTS of the "Questions of the History of Fortification”. Issue 1 (2010), Issue 2 (2011).